After ten years releasing under the ESDLCP moniker José Cerda aka Bruxista initiates with Human Resources a new cycle of work. And it is precisely the cycles, phases and rhythmic layering that defines his new persona as one rich in material, with its cut-off sounds that are manipulated and processed yet accommodating to the ear as it rewards the listener with a revelation of hidden features in abundance.

Surely to the chagrin of Cerda’s resentfully independent spirit, the music nonetheless holds distinct traces of Steve Reich’ minimalism, free jazz and dance music but it manages to intermingle its elements with such virtuosity that the past, present and future placidly coexist without the listener perceiving anything but the final result.

AMUSIO
The Chilean José Manuel Cerda proves to be a true entertainer in electronic (dance-, mind-) music with Human Resources (clang records). Variety and punch are his trump cards when he mixes widespread influences too many to mention here, with the insistence and passion of a gourmet chef that lets his ingredients simmer delicately on medium heat.

And yet – and this is revealed not least in tracks such as Rhythm Of Precarity, Anti-Selfie and Successful Underdevelopment – J. M. Cerda’s entertainment comes with a decisively teeth-grinding attitude.

His critique of (semi-experimental) dance music’s quota thinking and his suggestion that the fluid vitality of his arrangements is the result of denying an unforgiving capitalism is at least a welcome opportunity to re-imagine our reality, where man is provided with freedom both in listening as well as for uninhibited bodily movement.

FAZE
At the turn of the millennium, José Manuel Cerda discovered software that allowed him to produce audio. Before that he sold CDs on the street, but as ESDLCP he developed his own music, weaving some exotic dance designs. Now he continues as Bruxista. The sound? A bit more intertwined and a touch more melancholic. Cerda mixes cut-up beats, lots of percussion, touches of House, slightly hidden xylophones, chopped piano sequences and lively synthesizers. That makes for an enigmatic vibe, but sometimes also a shake of the head. 7/10

The track titles testify to Cerda’s continued political positioning with their overt reference to human challenges that the music can only hint at. As Bruxista, he partucuarly rebels against the formulaic manners of dance music as he trials the limits of dynamics from the calm and hypnotic to extreme restlessness. Here we see a clear sign of Cerda’s mature style as he allows the music to disintegrate, only to pick it up again in a rich listening experience that keeps the audience constantly on its toes. At times bordering the baroque in his elaborate execution, at others sparse and minimalist, Bruxista is convincingly on top of his game on Human Resources as the album celebrates an artistic vision in full bloom.

SOUND AND SILENCE
The Chilean José Manuel Cerda is better known for his work under the pseudonym ESDLCP (El Sueño De La Casa Propia), but with Bruxista he sets out on a new chapter where he develops an IDM full of dancing rhythms and jazzy fragrances that are reminiscent of Kieran Hebden aka Four Tet.

Bruxista crosses genres and does not limit his experiments. Working ever so subtly with rhythm he creates weightless melodies and as he accepts the shackles of an abstract house he achieves captivating tribal moments with virtuoso dancefloor roots.

Bruxista develops a music full of magic and fantasy through accumulated layers and superimposed materials. Patterns rotate inside the bowels of fleet and imaginative loops as the music soars in constant progress towards aerial spheres of intrinsic power and spinal glass-columns.

Cut from electronic material with organic viscerality, Human Resources surprises with its ability to make us dance to a permanent underground groove, with restraint the immediate virtue of the underlying intensity. Everything is a question of dosage and balance as the sounds bounce off echoing walls and bathe the changing atmospheres with flood-lights that make the patterns spin on snow-covered summits covered with bubbling breath. Superb. 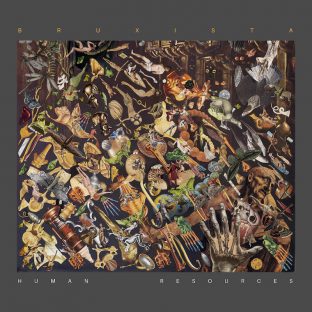