LARS FROM MARS AND ANDERS HOLST

Double Lives is a dreamy vision laid out in six tracks performed January 2022 in Copenhagen, Denmark. Recorded at the community space ‘uKirke’, the album takes its sonic inspiration from the acoustics of the church space in combination with the unusual Sound Object, a patent pending speaker system used for for sound rendering. Not directly appreciable in the recording (you would need to have a Sound Object at home to hear the effect), the multi-channel speaker cluster nevertheless permeates the sensibility of the sound throughout the album.

The at times heavily processed guitar takes on many shapes and forms as it weaves melodies, chords, textures and effects into the music, then further recorded, reassembled and processed in realtime by the digital companion. The elaborate computer programming blends impeccably with the rich guitar and together they form a continuum of sound where the elements are not perceptibly different from each other. That is, within each track only, since the difference between the tracks is at times remarkable.

Some tracks are held together by a realtime recorded guitar sample that facilitates the onset of improvisations that develop into rich mesh of filigree that intertwine, disentangles, enmesh and unravel. In other tracks multiple guitar voices refracts the live guitar and creates an instrument that seemingly is performed by innumerable hands that working the fretboard and plucks, strum and squeezes the strings to surprising effects.

Anders and Lars are part of the rich Danish techno and jazz scenes and together they explore in multiple directions such as interlaced sound systems, in-air synthesis and multidimensional performance environments to name some. Between them they have a vast experience in score composition, electrical circuitry and digital tools, with a large number of releases in very many formats throughout the years. Their collaboration is a fairly unusual one as the digital part behaves as a true performative instrument that runs in realtime exclusively and with nothing prerecorded.

This makes the dialog with the guitar a direct and spontaneous reaction, as evidenced by the music’s readiness for subtle changes that go well beyond strict formal development of the discourse and fabulations. The result is a music that resembles a journey more than anything, when the ideas reemerge and are reinvented in numerous ways.

A short powerful phrase sets False Endorsement in motion but is soon joined by disperse stabs and sustained sounds before the guitar embarks on some highly inventive melodic lines. The melodic work expands and contracts as the underlying segment stubbornly continues until it is replaced by a short melodic phrase that repeats until the music ends

Where’s My Poncho slowly builds up to a major chord before chromatic notes suggest a different world. The guitar strums within a sound world that delicately balances the gentle with the unsettling, as the backdrop of sustained chords slowly evolve and later starts their descend. A new scenario gradually develops from the lows, and a gentle throbbing casts a different light on the scenery as the guitar is softly played with an EBow.

A gentle repeating pattern opens My Weighty Heart and the guitar weaves short phrases that are echoed by canonic action from the laptop. As the tessitura expands, so does the number of layers that refract in many directions from the guitar, before matters settle into a gentle melodic composition. The sudden appearance of a counter-voice in the darker ranges suggests that things still may change.

Heavy metal sounds is what James On Course is all about as both guitar and electronics howl, cry, below, roar and scream in innumerable ways. Long swaying tones interject as a growling and buzzing pattern on repeat marks an irregular meter. In the end it all dissolves in coloured sweeps of noise that hush and quiet down as the action falls away and all goes silent after one, last burst of pink energy.

The Grim, The Terrible, and The Fate starts with gentle undulating waves that are supported by guitar sounds in the extreme low range. Foam drifts and glides before a gentle 6/8 pattern sets the proceedings onto a musical course that leads to a plateau of sustained sounds. A variation of the 6/8 pattern emerges and takes the music into a singular place of repose and reflection.

Linus On Peanuts opens with a distant drone before short, muffled bursts of guitar sounds suggest the inner tension that will propel the track forward. Dark pulsations and flying spikes meander in the background as ominous spectators. 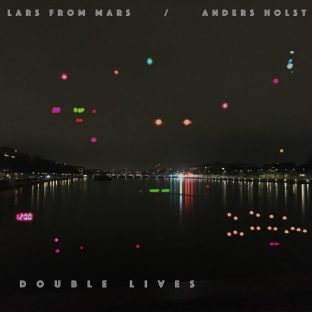